Stattus Five Duo is based on the Kapiti coast and serves the greater Wellington region with an extensive repertoire that includes easy listening for background, pop, rock, high energy dance cover songs from the late 60’s to current.
Leanne Hutton has been singing and performing in shows and clubs for several years now around the Wellington region. Paul McCathy is an Accomplished Bass and Guitar Player, who has performed with well-known bands in New Zealand since he was very young.
They make a dynamic team.

With these dates, so you don’t miss these coming events.

Club Night 9th October.   Our October guests are Steph Casey and the Racketeers

Head to our web site at http://www.wellingtonfolkfestival.org.nz/

Tickets for the festival are on sale now with early bird discounts available until 30 September. Bunks are available until sold out (last year they were gone in less than a week) so if you want bunk accommodation, please book ASAP.

There are a very few powered sites available for camper vans – these cost an additional $25 and you must include a note with your booking request for one of these. Like bunks, they will be allocated on a first come first served basis.

So mark your diaries now; 23-26 October = Wellyfest.  Save up on sleep before hand so you are ready for the long, exciting, inspiring, beautiful musical days and nights of this fabulous festival……

Our own Jo performs at Wellyfest

Our Club member (and committee member) Jo Sheffield submitted her own song in the ‘peoples choice’ competition run by the organisers of Wellyfest.

As a result of the voting she was invited to perform her song and a couple of others at the concert.

All the reports I have heard say that she did really well – and I am sure that the club as a whole will congratulate her on her efforts – well done Jo!

With her permission, hopefully a video will be posted on the site soon. 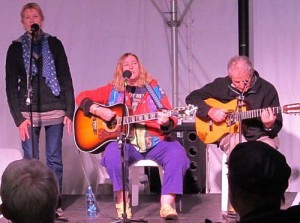 Into The East & The Federal String Band

Into The East & The Federal String Band

Performing for one night only a chance to take in an up close and personal show with two of folks finest New Zealand  acoustic acts at your very own Bent Horseshoe café , the days following see them both as guests at the 20th anniversary of the Wellington Folk Festival ……Pre sale tickets are $15  available from the venue or on eventfinder  door sales will be $20

The Federal String Band (formerly The FEDZ), featuring Frank John on fingerstyle lead guitar, Erin Manu on rhythm guitar/banjo, Andrew Bicknell on double bass and Cameron Burnell on mandolin are known for tight three part harmonies and sing a unique range of  styles, from railroad hollers and gravelly delta blues to country, gospel and the high lonesome sound typical of bluegrass music. They play a combination of acoustic stringed instruments and bring together a delightful collection of their favourite old and new Americana songs, from the traditional to the alternative. Their sound is heavily influenced by traditional American roots music. They perform in the styles of high energy bluegrass, lonesome blues, heartfelt ballads and country-swing, including rousing standards and their own compositions.

Describing Into The East is like walking through a Baz Luhrmann film. It’s watching old friends bounce on a trampoline whilst pouring their souls onto a kaleidoscope. It’s laughing until your chest burns, falling into a spiral of doubt then catapulting into an ocean of open arms.

Since busting onto the scene as a pair of Southern unknowns in 2013, Graeme Woller & Liv McBride have gathered a strong following thanks to their tight performances & crystalline sound that has been described as Fleetwood Mac with the poetic & harmonic charm of Simon & Garfunkel.

In the 10 months since debuting, Into The East have perpetually toured Aotearoa, picking up nominations for Best NZ Folk Album, a nomination for the highly regarded Taite Music Prize & a win in the form of APRA Album Of The Year & Band Of The Year at the 2014 Southland Entertainment Awards.