A brief history of Levin Folk Music Club as we celebrate 30 years of live acoustic folk music in Levin. 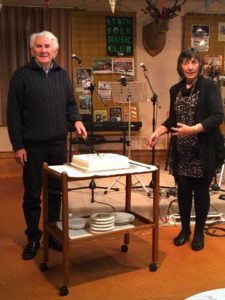 It all began in 1989 with Shenanigans coffee bar in Levin.  People would meet and sing at Danny’s place on a Sunday night. When Shenanigans closed, a small group (Eddie, Evie, Roy, Maree, Danny, Jim and Rona) got together to keep the music going and so the Levin Folk Music Club began.  Their first meeting place was in the Levin Waiopehu Tramping Club rooms off Parker Avenue.

In February 1992, with the Club growing in popularity, it moved to the Jaycee Lounge, above Leader and Watt in Oxford Street.  For nearly ten years, every month except January, the Club hosted musicians from New Zealand and overseas and provided an informal place where people could perform and enjoy music.

In November 2001, the Club moved to the Horowhenua Scottish Society Hall in Bartholomew Road.  Those involved for many years in setting up the hall, organising guest artists, welcoming at the door, refreshments, sound, newsletters and publicity have included Eddie, Evie, Han, Rona, Jeremy, Anne, Andrew, Tony, Shirley, Charlie, John, Brian F, Brian McK, and numerous other early supporters.  In 2011, under the steering committee of Chris, Ian, Andrew, Anne, Han, Barbara and Jill, with Colin as Chair, the Levin Folk Music Club became an incorporated society. 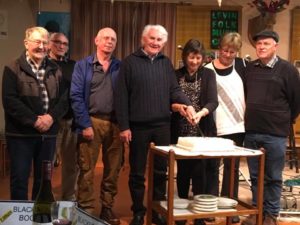 The Club has continued to grow with guest performers and local musicians sharing their interest and talents, encouraged and booked by Anne, Rona, Barb and now Dale.  Committee members (2019-20) comprising Val & John, Cavan, Jean, Dean and Dianne ensure the concert nights are run well, and the Club continues to be a warm, encouraging place of acoustic music.   A second night in the month has developed into an “acoustic/club” night under the supportive guidance of Kevin, Colin and Paul.